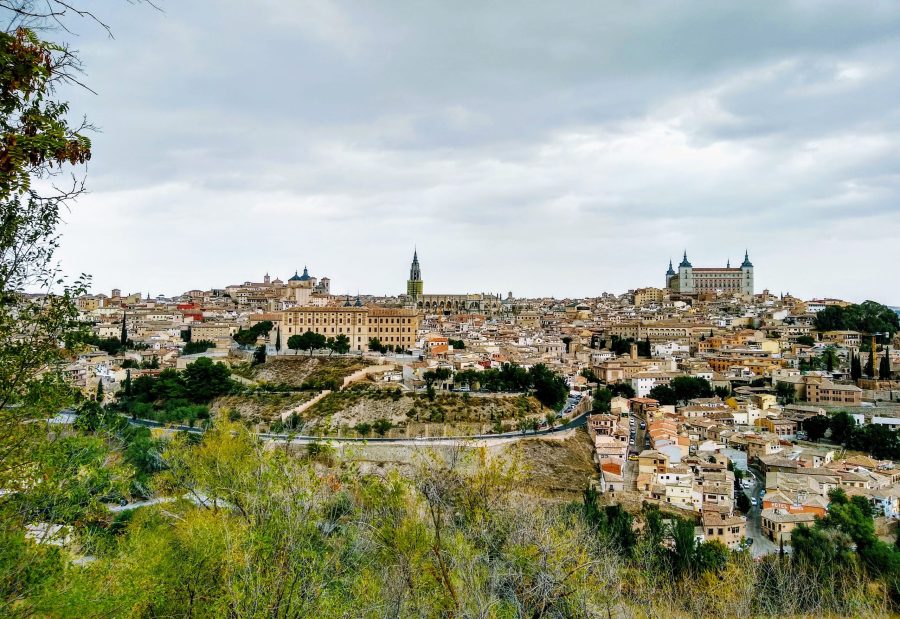 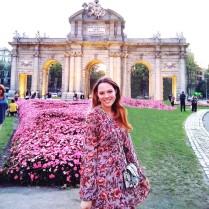 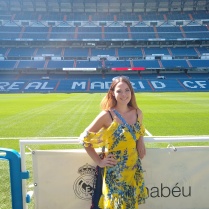 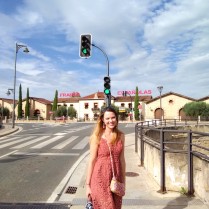 Part of this fashion choice is a preference for femininity, flowy things, and comfort.

But you want to know the real reason? Laziness. Dresses are one article of clothing. Just one! Dresses make me look like I put more effort in my appearance than I really have. Win.

I have friends who have never seen me wear pants. In fact, when I wore pants once at my office job several years ago, I counted at least five people that day commenting in astonishment, “You’re wearing pants!”

Normally, wearing dresses does not cause me a problem. I get compliments. I can eat whatever I want. Again, win.

Sometimes, however, wearing a dress is not that easy.

Such was the case in Toledo, Spain. 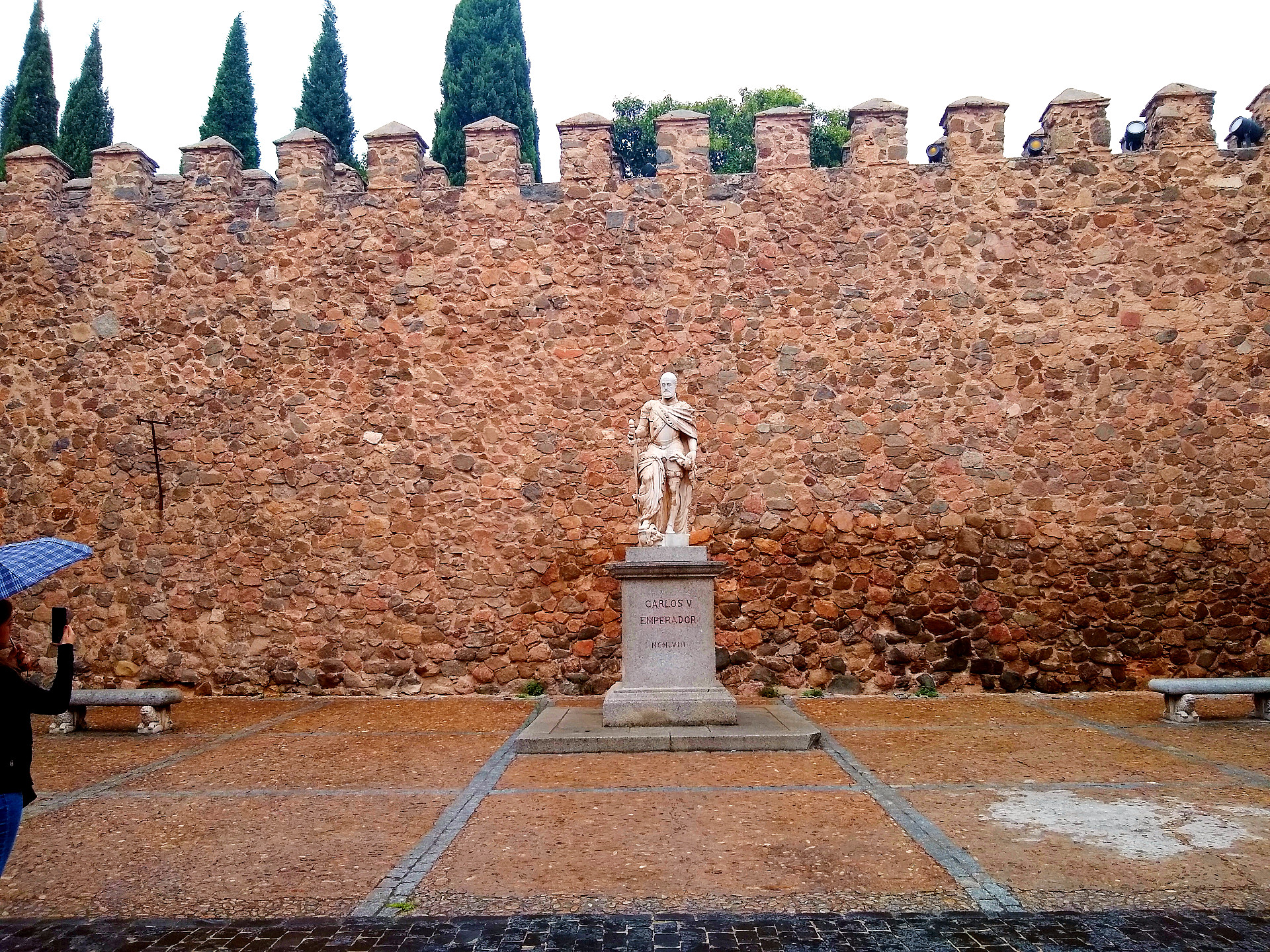 My friend and I decided to go to Toledo on a whim. We’d been in Spain for a month, but besides the touristic areas near our old apartment, we hadn’t seen much else. We figured Toledo would make a good day trip. It was only an hour away by bus (or 30 minutes by high speed train).

We checked the weather: a typical September day in central Spain. Sunny and around 80 degrees Fahrenheit (around 25 or so Celsius). Obviously no chance of rain. My friend and I were told upon arriving to Spain, “Oh, don’t worry; it only rains about three or four times per year in Madrid.”

Well, the day we went to Toledo was one of those three or four days. This is what I had decided to wear on our day trip: 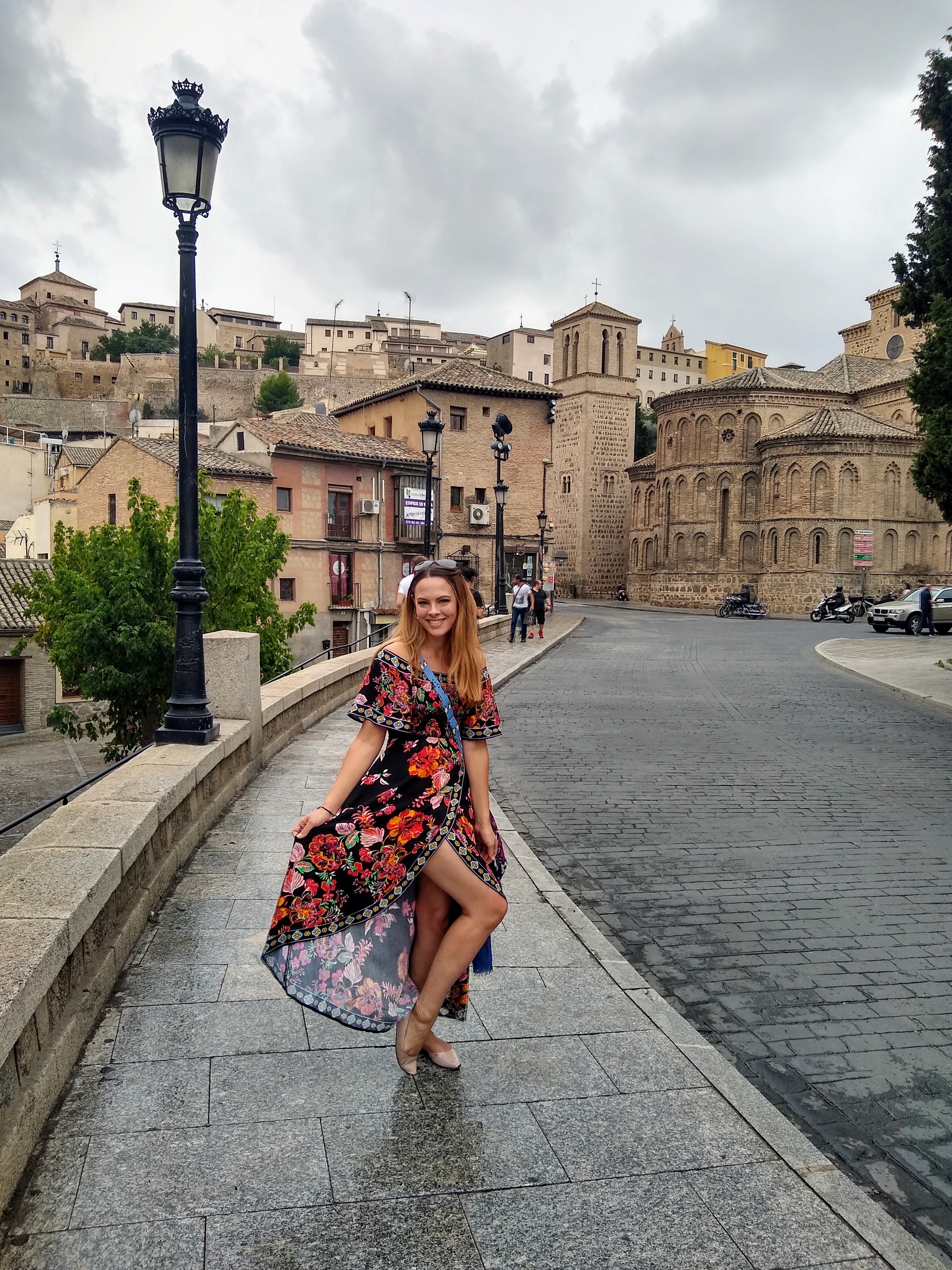 Now, upon looking at my wardrobe selection, we can already see some problems that may present themselves during a normal day trip with reasonable weather:

1) It is a long dress with an asymmetrical hem, which can easily get caught into things. Especially when you’re running to catch a bus that’s about to leave. Not that I’m speaking from experience.

2) It’s a wrap dress. That means that if I’m not careful while walking, one wrong move and I could get a boyfriend or get arrested.

3) It couldn’t make it more obvious that I’m a tourist. Maybe in Cartagena, Colombia I could blend in with the crowd. But we weren’t in a tropical Caribbean city; we were in a small town with fortresses and cathedrals and walls surrounding the city that were all hundreds of years old.

Now, add rain. What happens when it rains? It gets windy. What can happen if you’re not careful when you wear a dress like this and it’s windy? Read point two above.

So, this was not an appropriate outfit choice, as you can see. It’s a cute fashion choice, in my opinion. But definitely not a practical one for walking on cobblestone roads. (In my defense, I never promised to be a practical person when it comes to fashion.)

Nevertheless, we had a fun trip in Toledo. It was a cheap and quick bus ride away. We got to see an alcázar (or at least part of it before it closed). We walked through a beautiful cathedral, which my friend said rivaled the Vatican in its beauty. 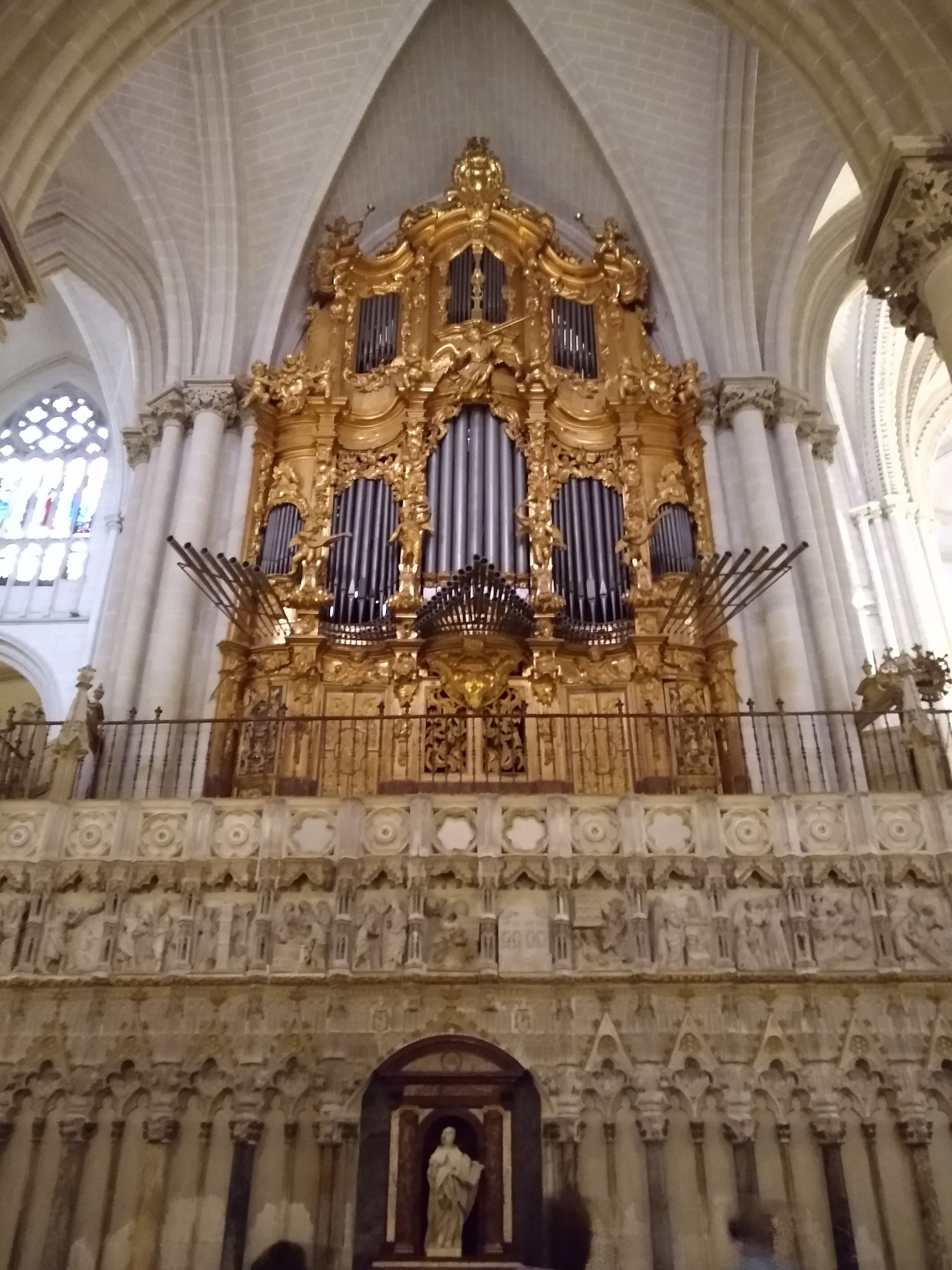 We also took the Hop On Hop Off bus, which took us all around the city. Originally, I wanted to walk to all of the sites, but after we realized how much walking that would have been, and taking my dress into account, we decided against it.

After seeing the main sites and the tour around the city, we ended up in the city center. We noticed that people were setting up for what looked like a concert. Google told us that the band was a fusion of violin and other genres like rock and EDM, and since Google never lies, we decided that would be a good way to end the day.

Overall, we enjoyed Toledo. So, as a conclusion, here is my advice for a fun day trip to Toledo:

1. Buy your tickets in advance. You can buy them at the bus station, but on Saturday, the buses were packed. You can buy them on omio.com. At the time I’m writing this, the bus is around 5 euros one way, and takes a little over an hour; the high-speed train is 11 euros one way, and takes around 30 minutes. I personally think the bus is a better value, unless you’re in a hurry. The buses we went on also had USB ports in case you needed to charge your phone

2. Take the Hop On Hop Off bus if you’re not into walking all over the city. The bus takes you to around 9 attractions. You can get on and off the bus all day (a new one shows up every 30-60 minutes). I’d say the bus is the easiest way to get to the mirador (city lookout). The tour also gives you information about all of the sites, and you can listen in many different languages. Ear buds were provided.

3. If you take the Hop On Hop Off bus, check if entry prices to various attractions are included.I’ve been told that they are in other cities. In our case, they were not.

4. Look up what time attractions close.Since we got there in the afternoon, we weren’t able to see as much of some attractions since they were closing soon (the Alcázar being one of them).

5. Go to Toledo if you like swords or war history.

6. Visit the Cathedral. It’s 10 euros to get in from the time I’m writing this. It is huge, and gorgeous, and also a little haunting.

7. Check the weather before you go.