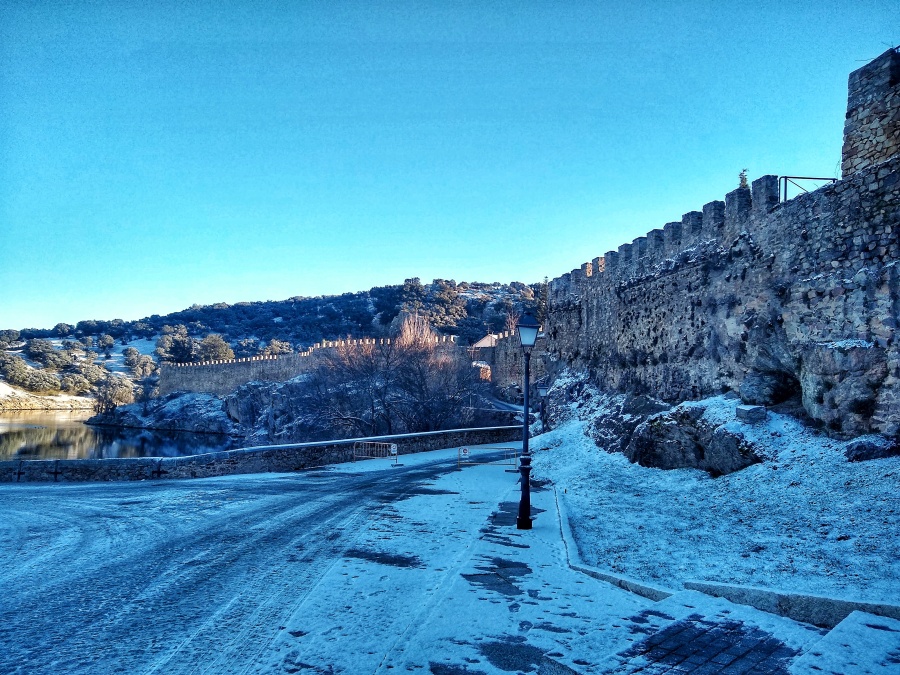 [Welcome to the vault of blog posts from the holidays that were unpublished – until now. Not wanting to spend the holidays crying alone in my apartment, I went on a mission to visit castles in the pueblos in the Community of Madrid. This quiet town taught me about the importance of community.]

I arrived at Buitrago de Lozoya at 9 o’clock in the morning. No one was outside.

It was early January. Whiffs of snow delicately sat on cars, terrace chairs, and the pavement, as if it was bashful for being there in the first place.

Buitrao de Lozoya was a small town, and when I say small, I mean small. I’d never been in a downtown without a street light before.

I’ve traveled alone for almost ten years. Only a few times had I felt creeped out when I arrived somewhere. This was one of those times.

While I would not call Spanish people early risers, usually by ten o’clock, people are out and about. But here? Next to nothing. The only souls out were a man with a mission to get inside as quickly as possible, and a dog who curiously looked up at me, wondering who this strange girl was (me).

I decided to tiptoe around the town and find the castle I saw on Google Maps. The good thing about small towns without streetlights is that it’s relatively easy to find a castle.

The unfortunate thing was, the castle did not open until close to noon. Is that when people woke up here? I’d already walked around the downtown three times in a matter of half an hour. I didn’t want to stay longer than I had to.

I was able to get some interesting shots around the castle, though.

As I killed time by walking around the town, looking at museum doors that were closed, and checking the bus schedule for the next bus, I wondered why anyone would want to live in this small town.

It’s two hours away from the capital. Aside from plazas and walks, there wasn’t much to do. I assumed career opportunities were much more limited than Madrid, a mere two hours away by bus. It didn’t attract a lot of tourism like Patones de Arriba, or even Manzanares El Real.

It was a beautiful town. It was surrounded by mountains, the air felt cleaner there, and had romantic cobblestone streets and old houses.

But my hometown is beautiful too, and I ended up leaving.

I wondered if young people wanted to leave as soon as they graduated high school. I’d want to, had I been born there. What jobs could you find? How much would a small business earn here? How many students were in their high school? Likely less than my high school, which had 700, and even that was too small for me.

Obviously, some people still lived there. So my question was, why? Why stay in a place so isolated and small?

Around eleven o’clock, people started to walk around outside.

The shops were so small, that only two or three customers could enter at a time. The rest of the people stood outside in the cold. But they didn’t seem to mind. They quietly chatted with the person in line next to them, as if they were old friends.

Were they all friends? I wondered. Or maybe they both happened to be standing in freezing cold, waiting for a baguette, and they might as well make the most of the situation and talk to their neighbor, instead of scrolling through their phones.

I watched the people as they did their grocery shopping. I watched at how they chatted with each other in cafes, several even sitting in terraces outside, despite the fact that they could see their breath when they talked.

It was cold, but their quiet conversations and smiles from enjoying each other’s company could have sent warmth all the way to Siberia.

I saw mothers buy epiphany cakes, as the holiday was coming up (epiphany cakes are a tradition in Spain in early January. The cake looks like a giant donut sandwich with loads of whipped cream in the middle).

I even started to see tourists walking around the castle. I was the only tourist alone; the others came with families. They walked around the castle, and inside a cathedral as well, that was now open. I decided to go inside, and what I saw inside was a gorgeous view of the town, which was much bigger than I’d thought.

The more I walked around, and the more people I saw, the more I got it. Why people stayed.

These people have something more valuable than the restaurants and the parks and the entertainment and the flashing lights, which I’d come to see weren’t that exciting at all, after a year of isolation and solitude.

These people had a community. They knew the baker and the butcher, their neighbors, and the people standing in line with them.

They knew they could depend on each other. And they were surrounded by beautiful mountains, and a river. And the town had its own castle. Who needs street lights when you have a castle?

Is what I wrote true? Were the people in this town really that close? I don’t know. But I could imagine that the story my mind weaved together about this town, after I’d spent a solitary Christmas and New Year, was what I really longed for that whole time.

I wished I had the guts to talk to someone.

I wished I could ask what life was like in that town, what traditions did they have, what they enjoyed there, had they ever seen the castle, did they know all their neighbors and shopkeepers by name, could they go hiking in the mountains nearby, and whatever else came to mind.

I would have gladly caught a later bus to listen to someone tell me about that town. But I didn’t know how to ask without feeling awkward, and I was continuously reminded how out of place I looked in that town, preparing a holiday for a religion that was not mine. So I left.

One thought on “Buitrago de Lozoya: I Showed Up and No One Was There”